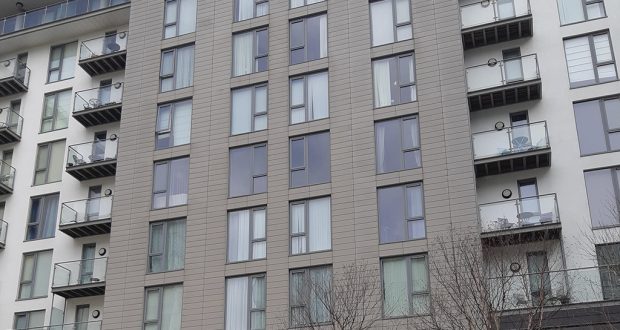 Bowmer & Kirkland is to reclad a block of flats in Milton Keynes after fire building fire safety concerns while it contests a legal dispute with Crest Nicholson according to constructionnews.co.uk.

The developer, a former freeholder of the site, has launched action over a series of alleged defects at the property, including inadequate fire stopping in the cladding and render.

The Dakota House building in The Hub, which was completed in 2007, features 76 apartments and is under surveillance by a waking watch in a bid to minimise the risk to residents.

Crest Nicholson said the defects were discovered when the building was inspected following complaints about water leaking into the building through the facade.

Bowmer & Kirkland has admitted liability on remediation work to freeholder The Hub Management Company, but disputes Crest Nicholson’s claim. It has launched its own claim against architect Veretec, which it alleges is responsible for fire-stopping defects.

Crest’s claim against the contractor, launched last year, alleges that as well as fire-stopping problems, the building also has defects in the support structure of the cladding system and render, inadequate thermal insulation and water ingress through the cladding system.

Bowmer’s claim against Veretec alleges that Dakota House contains combustible expanded polystyrene insulation, as well as problems with cavity barriers. A spokesman for the contractor said the cladding is made from terracotta tile.

The cost of remedial work has not yet been revealed.

Crest Nicholson said in a statement: “During the course of investigations relating to reports of water ingress through the building’s facade, we discovered fire safety defects, namely the presence of combustible insulation and defective cavity barriers. Acting on expert advice, we took immediate action to safeguard the residents of the building pending remedial works, by implementing a 24/7 (‘waking watch’) patrol and later installing a fire-detection system.”

She said the company’s priority has been supporting the freeholder and management company to ensure the safety of residents, adding. “We are pleased that [Bowmer & Kirkland] has now offered to carry out the necessary remedial works and we look forward to these being completed as soon as possible.”

In its legal defence, Bowmer & Kirkland questioned whether Crest Nicholson, as a former freeholder, had the right to sue it over the building.

In a statement, a spokesman for Bowmer said the firm had worked with freeholder The Hub Management Company (Building 500) Ltd over building issues and “has offered to carry out remedial works to the three facades of the building to comply with building regulations”.

He added: “The envelope of Dakota House is of a different construction to other buildings at the Hub, being terracotta tile, insulated render and glazing to the ground-floor retail areas.

“Pending remedial works, which will involve the replacement of the terracotta and render, fire alarms are installed in individual apartments and the building is subject to 24-hour surveillance through The Hub estate managers.” ​

Dakota House is next door to a Travelodge hotel that was subject to a separate dispute between the hotel chain and contractor McAleer & Rushe over allegedly combustible aluminium composite material and terracotta-tile cladding. That case was settled confidentially in February.

Contact us for for expert fire safety advice and fire risk assessment of all types of cladding and the impact it can have on the your building fire safety.

If you are looking for Fire Risk Assessments in Hampshire, Surrey, Sussex, Kent, London, the South of England or anywhere in the UK please call on 0203 4787347 (London office) or 01243 811470 (Sussex office) or alternatively email us at info@source-fire.com